Histone Code: A Challenge to Evolution, an Inference to Design 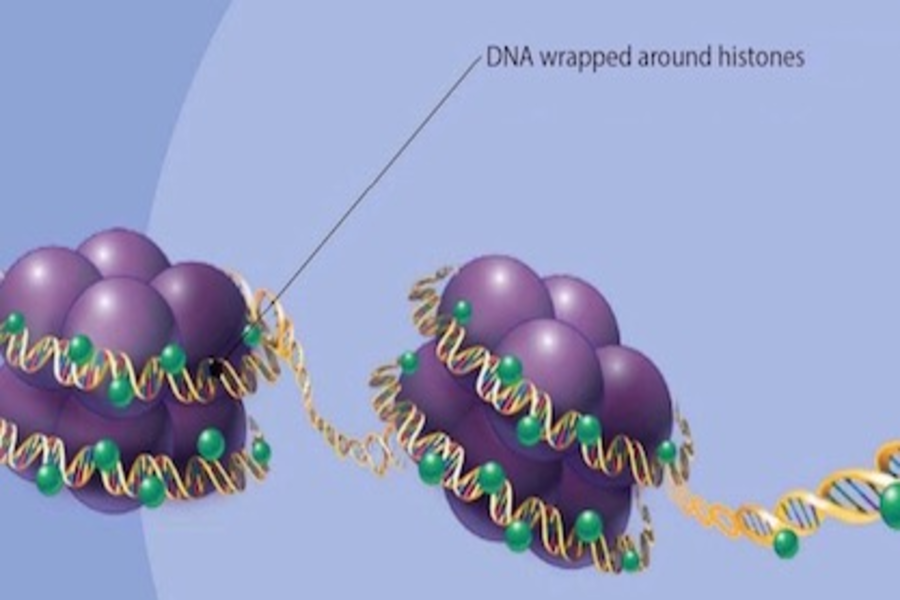 Discoveries over the past couple of decades have served to underscore the thesis that biological systems are chock-full of complex and specified information content, even beyond the sequence of base pairs along the sugar-phosphate backbone of the DNA molecule. Yet information is precisely the type of phenomenon that in every other realm of experience is habitually associated with the activity of a conscious mind, an intelligent cause.

Consider the histone code and its design implications. What follows barely scratches the peak of the proverbial ice berg. Much more detail could be given, but let’s start here.

Organizing and Packaging the DNA

Histones are responsible for organizing and packaging the DNA of a cell nucleus into structural units known as nucleosomes. They function as spools, around which the DNA of the cell winds, thereby greatly compacting the chromosomal DNA. The resulting DNA-protein complex is called chromatin. Two each of the histones H2A, H2B, H3, and H4 form a histone octamer, which wraps roughly 1.7 turns of DNA (approximately 146 base pairs). A segment of DNA wrapped around this octamer, plus a linker sequence (of approximately 53 base pairs), forms the basic unit of DNA packaging, the nucleosome.

Histones can undergo posttranslational modifications that influence their interaction with proteins and the DNA. Long tails protrude from the nucleosome histones, which can undergo covalent modification. These include methylation [1,2], acetylation [3,4,5), phosphorylation [6,7], and ubiquitylation [8,9].

Histones do far more than simply provide structural support for DNA. It is well known that histones are intimately involved in regulating gene expression. This is accomplished by the addition of methyl groups to histone residues by enzymes known as histone methyltransferases, or by acetylation and deacetylation of lysine residues within the N-terminal tail that protrudes from the nucleosome’s histone core (accomplished by histone acetyltransferases and histone deacetylases). Combinations of these modifications constitute the so-called “histone code” [10, 11, 12, 13, 14]. Covalent modification of histone molecules is dynamic, since marks are constantly being added and removed. As has been stated in the literature, “The combinatorial nature of histone amino-terminal modifications thus reveals a ‘histone code’ that considerably extends the information potential of the genetic code”. [15]

It should not come as a surprise that these patterns of histone modification are known as the “histone code,” for the combination of histone modifications constitutes a language system, in much the same way as the genetic code constitutes a language system. Indeed, the number of distinct modifications that are possible on an individual nucleosome is ginormous. Literally thousands of combinations can exist, even when we account for the fact that some modifications are mutually exclusive (e.g., a lysine cannot be methylated and acetylated at the same time) and that other markings are added together as a set. Markings can signal when and how a gene should be expressed; or that the chromatin has been damaged and is in need of repair; or that a stretch of chromatin has been newly replicated.

These codes are read by a combination of molecules that are known collectively as a code-reader complex. [16] The code-reader complex comprises a series of modules that recognize a specific histone modification. When the complex encounters several of the different histone marks that it recognizes, it binds tightly. This results in combinations of markings on chromatin attracting protein complexes that execute the appropriate biological response.

Following the “writing” of a mark on one or a few nucleosomes, the “code-writer” enzyme works together with a “code-reader” protein that is present in the same protein complex. This protein recognizes the mark and binds tightly to the modified nucleosome, positioning its attached writer enzyme in close-proximity to the nucleosome that lies adjacent. In this way, the mark is spread in a “hand-over-hand” fashion along the chromosome. [17] The protein complex responsible for reading and writing is likely to possess multiple readers and writers and can facilitate the spread of multiple modifications on the nucleosome.

Note that for this mechanism to work, the reader has to recognize the mark produced by the writer. Furthermore, often these reader-writer complexes also possess an ATP-dependent chromatin remodeling protein, which works collaboratively with the reader and writer to decondense or condense the chromatin (needed for gene expression or silencing respectively) as the reader moves along.

In order to prevent cross-talk between adjacent chromatin domains, there exist DNA sequences that serve as a barrier between chromatin domains. Several of these have been identified through genetic engineering techniques that can add or delete DNA sequence to or from chromosomes. For instance, in red blood cells, the β-globin locus (found in decondensed or activated chromatin) is separated from an adjacent region of condensed (silenced) chromatin by a sequence called HS4. [18,19] Deleting this sequence results in the β-globin locus being invaded by condensed chromatin. The result is catastrophic, for the globin genes are not well expressed, and individuals carrying this deletion suffer from severe anemia.

Examination of the HS4 barrier sequence has revealed that it possesses a cluster of binding sites for histone acetylase enzymes. [20] Since a lysine side chain cannot be both acetylated and methylated, histone acetylases and histone deacetylases are prime candidates for the creation of DNA barriers that inhibit the spread of condensed or decondensed chromatin.

Is the Histone Code Best Explained by Evolution or Design?

Even a careful search finds no attempts at articulating a possible evolutionary scenario to explain the origins of the histone code. That such a scenario could even exist is doubtful. Whenever we discover information-rich, or language, systems, the search space is far, far too vast to be sampled in the time available in the history of life. To the contrary, the molecular processes discussed here show every evidence of intentionality, and deliberate design and planning. Furthermore, these systems show indicators of being irreducibly complex. For example, there is not much use in having a mechanism of “writing” these marks onto nucleosomes unless there is simultaneously a mechanism for “reading” them. This histone coding system must, furthermore, evolve simultaneously with insulator or barrier sequences to prevent unwanted and confusing crosstalk between adjacent chromatin domains.

However, there is yet another problem posed by the histone code for evolutionary accounts of their origin, and that is a co-dependency paradox, more popularly known as a “chicken and egg” problem. As stated above, the initiation of gene expression depends upon specific modifications to histone tails. However, these tail modifications are themselves the result of gene expression decisions which were themselves dependent upon the histone code. In an evolutionary scenario, it seems infeasible that such a case of causal circularity could have arisen by slight successive modification. The inference to design, in short, appears strong.

1 thought on “Histone Code: A Challenge to Evolution, an Inference to Design”