The Wonders of Genomic Acrobatics: Ciliated Protozoa as a Case Study 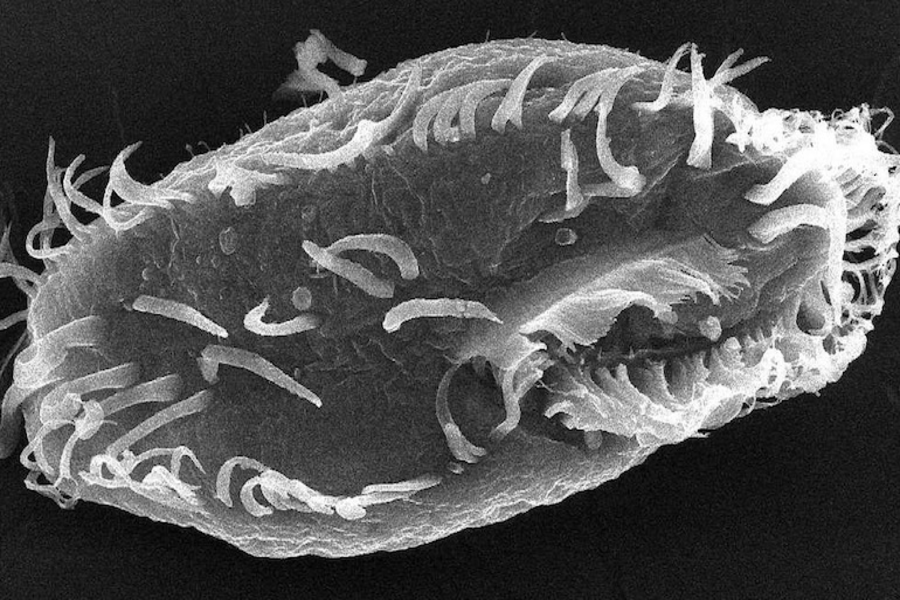 In a recent post, I looked at the biological information that is mediated by the histone code, and its implications for the debate about intelligent design. However, there are several other important forms of biological information that exist in the cell that are independent of the sequence of DNA. This article will consider an example of how a cell can reorganize and rearrange its own DNA sequence. The most spectacular known example of this is the ciliated protozoa, or ciliates, and so we will be presenting them here as a case study.

The ciliates are a large family of eukaryotic protozoa. In the same cell, they possess at least two nuclei: at least one small germ-line “micronucleus” and at least one large somatic “macronucleus,” a phenomenon known as “nuclear dimorphism”. [1,2,3] During mitosis, the RNA and protein molecules required for reproduction are encoded by the macronucleus, whereas the micronucleus encodes the entire genome required for meiosis (but is not active in gene transcription). The chromosomes belonging to the macronucleus exist in high copy numbers but only carry the active genes that govern the cell’s operations. By contrast, the micronuclear chromosomes possess the full genome and thus contain many sequences not present in the macronucleus.

Ciliates undergo sexual reproduction by conjugation: That is, two cells come together and are joined by a cytoplasmic bridge. Note that conjugation is non-replicative and is done with the purpose of replacing old genes in the nuclei. Cell division itself occurs during vegetative growth — asexually by binary fission.

In the new macronucleus, noncoding sequences of DNA, which interrupt gene loci (called internal eliminated sequences, or IES’s), in addition to micronucleus-limited protein-coding genes, must be eliminated. [4] This is accomplished by RNA interference. It is thought that segments of DNA are marked for retention by various epigenetic modifications mediated by piRNAs. [5] Since the remaining fragments, known as macronuclear-destined sequences (MDSs), are typically scrambled or inverted, they have to be reorganized by permutations and inversions to create functional genes. [6] Formation of the new macronucleus is guided by RNA molecules, both long and small non-coding RNAs, from the old macronucleus. [7,8,9,10,11]

The ciliate Oxytricha trifallax possesses more than 16,000 unique chromosomes, each containing only one to eight genes (90 percent contain only a single gene) and averaging 3.2kb each (hence they are referred to often as “nanochromosomes”). [12] The organism deletes some 95 percent of its germline genome, resulting in the severe fragmenting of its chromosomes. [13] The hundreds of thousands of remaining pieces are subsequently sorted and reordered. [14] The somatic nuclear genome, therefore, is put together through RNA templates and signals that arose from the parent cell’s macronucleus. Xiao Chen of Princeton University and his co-authors explain. [15]:

Programmed DNA rearrangements in the single celled eukaryote Oxytricha trifallax completely rewire its germline into a somatic nucleus during development. This elaborate, RNA-mediated pathway eliminates noncoding DNA sequences that interrupt gene loci and reorganizes the remaining fragments by inversions and permutations to produce functional genes. Here, we report the Oxytricha germline genome and compare it to the somatic genome to present a global view of its massive scale of genome rearrangements. The remarkably encrypted genome architecture contains >3,500 scrambled genes, as well as >800 predicted germline-limited genes expressed, and some post-translationally modified, during genome rearrangements. Gene segments for different somatic loci often interweave with each other. Single gene segments can contribute to multiple, distinct somatic loci. Terminal precursor segments from neighboring somatic loci map extremely close to each other, often overlapping. This genome assembly provides a draft of a scrambled genome and a powerful model for studies of genome rearrangement.

James Shapiro, of the University of Chicago, summarizes the complexity of this process [16]:

The process is complex and involves elimination of much germ-line-specific DNA (up to 90%, depending on the species), as well as reassembly of scrambled germ-line sequences into accurate coding sequences. The thousands of DNA cutting and splicing events involved in development of each new macronucleus occur regularly and reliably in the space of a few hours. The DNA acrobatics of macronuclear development constitute the most elaborate example known of rapid restructuring to form a novel functional genome architecture within a single cell generation.

Stefan Juranek and Hans Joachim Lipps also draw on the analogy of acrobatics to describe this remarkable process [17]:

Unfortunately, at this point, the precise mechanisms involved in those genome unscrambling events is poorly understood. However, for a summary of what has already been established, in particular in regard to the involvement of RNA molecules and epigenetic modifications, readers are referred to the discussion in [18], pp. 5-13. One thing that is understood is that segments of DNA called “pointer sequences” flank the macronuclear-destined sequences and serve as a sort of encryption system. The genome also encodes RNA molecules that mark segments of DNA that need to be moved, thus serving as a sort of decryption system.

What are the implications of this process for evolutionary biology? The problem is that the programming for this elaborate process of genomic rearrangement must be in place already, before the degradation, scrambling, and reassembly of germline DNA. A genome that cannot be read would yield a dead, non-viable, organism. How, then, can this sort of process be accounted for by evolutionary processes? Natural selection is powerless to look into and plan for the future.

A further problem pertains to the excision of internal eliminated sequences (IESs), non-coding stretches of DNA that must be removed. Removal of these sequences is actually fundamental to gene expression, since many, indeed most, of them interrupt protein-coding regions of genes, i.e., the exons. Chen et al. (2014) note that [19],

[M]ost functional information is encrypted in the [micronucleus], and macronuclear development is a process of decryption. Most IESs interrupt exons (84.7%), making their removal a strict requirement for gene expression.

The implication is that the elaborate process for removal of these non-coding sequences must be in place simultaneously with the presence of these internal sequences that interrupt exons — otherwise these coding-stretches of DNA would be rendered non-functional, and quickly eliminated by purifying selection (to prevent energy from being wasted by carrying and transcribing a broken gene). A gene that cannot be expressed as a protein also is no longer under evolutionary conservation and is likely to incorporate deleterious mutations that further inactivate or “break” the gene. Therefore, the presence of these internal sequences that interrupt exons must each exist simultaneously with a mechanism for their removal. But there is only a need for a mechanism for their removal after the exons are already interrupted by these sequences. Explaining this sort of phenomenon by slight, successive modification, as Darwin envisaged, seems problematic.

If unguided, mindless, forces of random variation acted upon by natural selection cannot explain the origins of such phenomena, is there any other cause that can? One does not need to have a PhD in molecular biology to determine that whatever is the cause of phenomena such as this must be a cause that possesses the capacity of foresight and planning — a cause that can look into the future and visualize complexity, bringing together everything needed to realize a complex end-goal. But goal-directed causes are fundamentally indistinguishable from intelligent design.