The Secular vs. Sacred Distinction: Is it Valid? 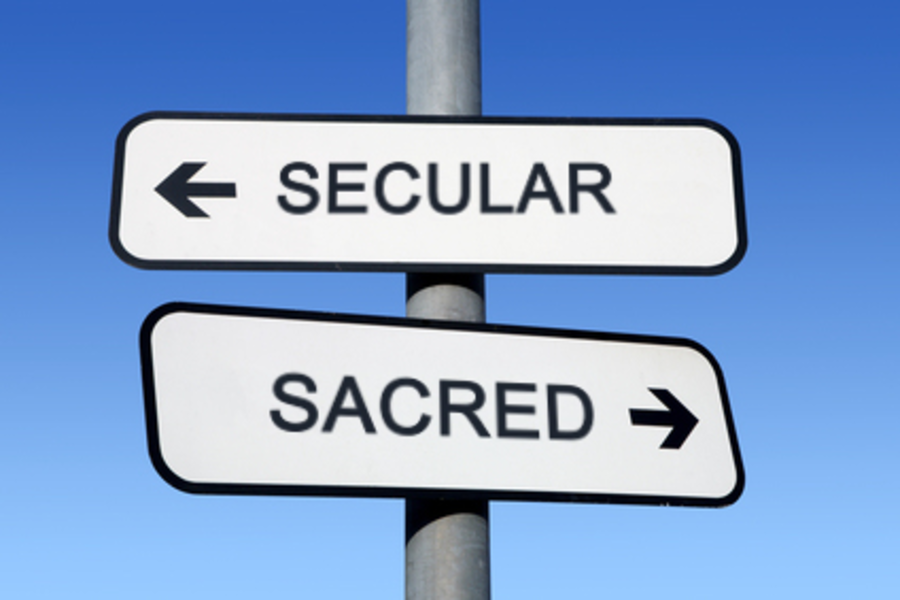 The secular vs. sacred distinction refers to the idea that there are those things in this world which are part of the secular realm and other things which are part of the spiritual or religious realm. In the secular realm are such things as one’s professional career, sports and politics. The perception of the sacred realm is that it involves such things as prayer, reading the Bible and church-related activities.

I believe the distinction between the secular and the sacred to be a valid one, although they do to an extent overlap and it is a mistake to draw a sharp dichotomy between the two spheres. Unfortunately, our culture and even the church has been conditioned to view these two spheres as being mutually exclusive. Furthermore, in the United States, which has a constitutionalized separation of church and state, the secular and sacred are routinely pitted against one another in the public square.

The Christian should not make the sacred secular, and hence the secular cannot be equated with the sacred. However, the Christian should strive to make the secular sacred – that is to say, in whatever he does (whether that domain be work or sport or interpersonal relationships) everything should be done to the glory of God. The apostle Paul writes in Colossians 3:17, “And whatever you do, in word or deed, do everything in the name of the Lord Jesus, giving thanks to God the Father through him.” Paul elaborates on what he means by this in verses 18-25. According to Paul, our work and interpersonal relationships (especially with respect to family members such as parents, children, husbands and wives) should be viewed by the believer as a form of ministry, rather than being wholly distinct from it. Paul even goes so far as to say elsewhere that eating and drinking itself is to be done to the glory of God (1 Corinthians 10:31). In this sense, then, the secular and sacred overlap with each other – that is, the Christian is to make even the secular into something sacred. To quote Charles Spurgeon (Sermon: “All for Jesus”, 1874),

“To a man who lives unto God nothing is secular, everything is sacred. He puts on his workday garment and it is a vestment to him. He sits down to his meal and it is a sacrament. He goes forth to his labor, and therein exercises the office of the priesthood. His breath is incense and his life a sacrifice. He sleeps on the bosom of God, and lives and moves in the divine presence.  To draw a hard and fast line and say, “This is sacred and this is secular,” is, to my mind, diametrically opposed to the teaching of Christ and the spirit of the gospel.”

It is often thought by Christians that we should isolate ourselves from the things of this world. However, this is contrary to the words of Jesus in John 17:14-19:

Paul further indicates in 1 Timothy 4:4-5 that,

4 For everything created by God is good, and nothing is to be rejected if it is received with thanksgiving, 5 for it is made holy by the word of God and prayer.

The context of these verses is Paul’s response to those who would seek to forbid marriage and compel people to abstain from certain foods. Paul responds, however, that since everything made by God is good, there is nothing wrong with food and sexuality in themselves, and in fact all things are made holy by the word of God and by prayer. As Paul writes elsewhere, “To the pure, all things are pure, but to the defiled and unbelieving, nothing is pure; but both their minds and their consciences are defiled” (Titus 1:15). Jesus Himself likewise said that “it is not what goes into the mouth that defiles a person, but what comes out of the mouth; this defiles a person” (Matthew 15:11).

Another way in which the secular may be made sacred is through utilization of “secular” tools such as social media, film, art, and music for ministry, worship, and proclamation of the gospel. One’s work in academic disciplines such as science can be an expression of worship, as well as a means by which one can appeal to the unbeliever’s faculties of reason to persuade him that God exists.

Indeed, the believer should wield tools from any and every discipline, bringing everything to bear on the truth. The second century church father Clement of Alexandria put it this way (The Stromata, book 1, chapter 9):

“Some, who think themselves naturally gifted, do not wish to touch either philosophy or logic; nay more, they do not wish to learn natural science. They demand bare faith alone, as if they wished, without bestowing any care on the vine, straightway to gather clusters from the first. Now the Lord is figuratively described as the vine, from which, with pains and the art of husbandry, according to the word, the fruit is to be gathered.

We must lop, dig, bind, and perform the other operations. The pruning-knife, I should think, and the pick-axe, and the other agricultural implements, are necessary for the culture of the vine, so that it may produce eatable fruit. And as in husbandry, so also in medicine; he has learned to purpose, who has practised the various lessons, so as to be able to cultivate and to heal. So also here, I call him truly learned who brings everything to bear on the truth; so that, from geometry and music, and grammar, and philosophy itself, culling what is useful, he guards the faith against assault.”

Augustine of Hippo similarly said that “wherever we turn among the things which [God] created and conserved so wonderfully, we discover His footprints, whether lightly or plainly impressed” (City of God 3.11.28). Therefore, in whatever field we study – whether that be science or mathematics or philosophy – we uncover the footprints of God.

As Christians we have the obligation and responsibility to be the “salt of the earth” and the “light of the world” (Matthew 5:13-14). However, we can only retain our saltiness if we are distinctive — in, but not of, the world.

In conclusion, it is appropriate to distinguish between the secular and the sacred, provided that the territory at which they overlap is recognized. Things which are sacred should not be secularized, but what is secular can and should be made sacred such that the gospel may be advanced through it.