Revisiting the Trinity in Acts 2: A Reply to Dale Tuggy 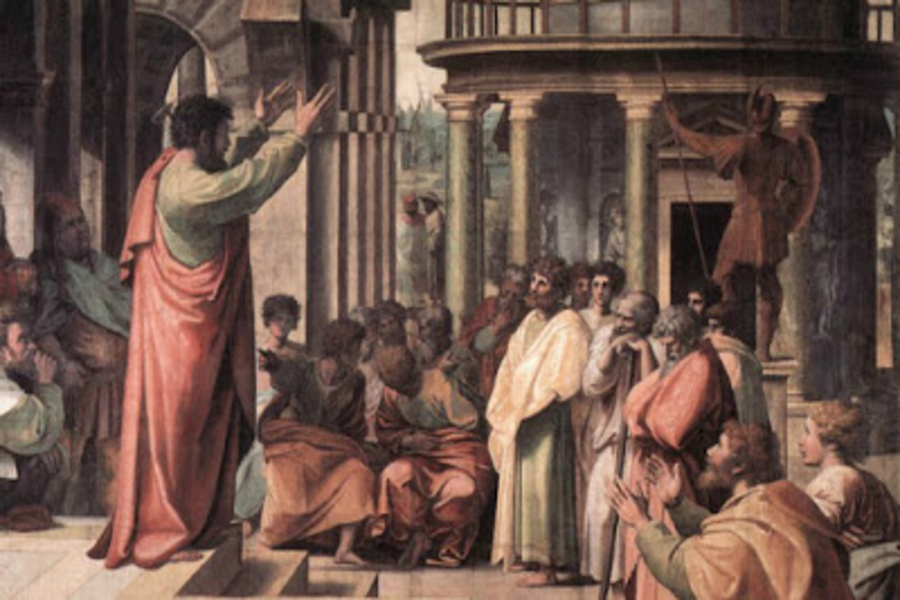 A few days ago, I posted an article addressing a blog post that was written by Biblical Unitarian heretic Dale Tuggy, in regards to Peter’s preaching in Acts 2. Dale argued that, since Peter makes no reference to the Trinity or deity of Christ in his sermon to the Jews in Acts 2, these doctrines must therefore not be essential to the gospel, and that they moreover must be dispensable beliefs for salvation. In my rebuttal, I showed that Peter’s preaching in Acts 2 in fact does affirm the deity of Christ, and, moreover, his gospel presentation is profoundly Trinitarian.

Over at his blog, Tuggy published a response to my article, defending his position that Peter does not affirm the deity of Christ or the Trinity in Acts 2. My friend Steve Hays then joined the fray, publishing a short rebuttal to Tuggy’s article. I have to confess to being rather disappointed with the lack of substance or depth in Tuggy’s response article, and the misrepresentation of Trinitarian doctrine.

I had made the point previously that the sermon in Acts 2 does not mention Christ’s death being an atoning sacrifice for our sins. Thus, applying Tuggy’s logic consistently would also make that doctrine dispensable to the gospel. Tuggy replied,

I assume he means here something like a substitutional theory of atonement. That’s right, I don’t think anyone has to believe that in order to be saved. A person doesn’t have to believe any developed theory about the mechanics of forgiveness, i.e. a theological atonement theory, in order to be saved. That is as it should be. All Peter tells them in Acts 2, is if they repent and get baptized, they’ll be forgiven.

Actually, it does not matter what theory of atonement one buys into. Nowhere in Acts 2 does Peter even assert that Jesus died for our sins. Yet no Christian would argue that this indicates that Jesus dying for our sins is not definitional to the gospel. One must also make a distinction between a lack of belief as a result of ignorance or immaturity in the faith, and a considered denial of those doctrines. I do not believe it is necessary to believe in the Trinity to be saved. One might hold all sorts of heretical understandings out of ignorance and yet still be saved. A wilful rejection of the Trinity, however, is something else entirely.

I noted in my previous article that while Peter’s sermon in Acts 2 does not use the philosophical categories that would be later developed to convey the idea of the Trinity, Peter’s sermon is nonetheless profoundly Trinitarian. Tuggy replied,

Here Mr. McLatchie introduces a red herring, a distraction. The use of “philosophical categories” (i.e. terms) is irrelevant. I would count it here if in any way, the tripersonal God were mentioned as such, or the “deity of Christ” or the two natures of Jesus were taught. The terms needn’t have time-traveled back from Constantinople (381) or Chalcedon (451). Any sort of explicit statement or clear implication would do.

I think my previous article showed just that. As we shall see, Tuggy’s rebuttal to my points falls very far short of convincing.

Unfortunately, Mr. McLatchie also introduces a weasel word here, on which the rest of his piece depends: “trinitarian.”
If this means “having to do with the Trinity,” i.e. the tripersonal God, then there is no shred of evidence that what Luke is doing here is trinitarian, nor does my opponent provide any.
If “trinitarian” means just “having to do with the Father, Son, and Spirit” (this triad, however they’re related to one another), then of course all of Acts is “trinitarian.” But this is a trivial point. Any unitarian’s theology will also be thorough “trinitarian” in this loose way of using the word.
He assets [sic] that Peter’s first sermon here is thoroughly “trinitarian.” In the first sense, this is patently false. In the second sense, it is obviously true. This is how weasel-words work. The hope is that you’ll agree to the obvious truth, and then not notice when we switch to the (at best) controversial claim.

Of course, I refer to the former use of the word Trinity — i.e. defined as a tripersonal God. That is what my previous article proposed to defend. There is no weasling here on my end. Tuggy just doesn’t get it.

Next, McLatchie serves up an example of the fulfillment fallacy. The argument is:
1. In Joel 2 Yahweh (truly) promises to pour our his spirit on all flesh.
2. In Acts 2 Peter (truly) says that Jesus poured out God’s spirit on all flesh.
3. Therefore, Yahweh is Jesus (and vice-versa).   (1,2)
Note the vast gap between 1 and 2 and the conclusion 3. The argument is invalid; 3 doesn’t follow from 1 and 2. 1 and 2 could be true while 3 is false in this way: Yahweh pours out his spirit through (the risen and exalted) Jesus. 1 and 2 are merely compatible with the identity of God and Jesus (claim 3). But 1 and 2 do nothing to support 3.

The trouble here is that Tuggy has thoroughly misrepresented my argument. Tuggy sets up my argument as follows:

Of course this form of logic is invalid. However, that is not my argument. Rather, the argument is that, according to Peter in Acts 2, God promised through the Prophet Joel that God, YHWH, would pour out His Spirit on all flesh. Moreover, according to Peter in Acts 2, this promise from the book of Joel has been fulfilled since Jesus has poured out the Spirit as prophesied. Thus, I would argue that Peter is identifying Jesus as YHWH.

Tuggy goes on to commit a massive blunder, which shows that Tuggy lacks the expertise in Trinitarian beliefs to be speaking publicly about the issue. Here it is:

Worse, 3 is incompatible with every Christian’s belief that there are differences between God and Jesus. It’s not even a conclusion which a trinitarian should want! Do you see why?
Amazingly, Mr. McLatchie celebrates having (he thinks) proved the numerical identity of Yahweh and Jesus, and then immediately mentions that they qualitatively differ!

After quoting my statement that Jesus in Acts 2 is presented as distinct from the Father, Tuggy continues,

Right Jesus received the spirit from the Father. (Acts 2:33) The Father didn’t receive his spirit from anyone. It follows that they are numerically two. Mr. McLatchie needs to learn this self-evident truth, the indiscernibility of identicals, and then theologize (and interpret scripture) accordingly.

Tuggy makes the mistake of assuming that Trinitarians believe that God is Jesus. Such a statement, however, is in error. It is correct and proper to say that Jesus is God, but it is not correct for us to assert that God is Jesus. While the Son possesses all of the divine attributes, prerogatives and qualities that make God God, He does not exhaust all that God is — there is also the Father and the Spirit.

Tuggy goes on to make the same mistake in regards to my comments about the reference to the name of Yahweh in Joel, and Peter’s statements that we are saved through the name of Jesus. Tuggy replies,

But of course, in this new covenant, you return to God, you get reconciled to God through Jesus. This doesn’t imply that God just is Jesus, and vice-versa. Rather, the whole scheme presupposes that God and Jesus are two, since the man Jesus is a mediator (1 Timothy 2:5) between us and God, functioning like a high priest (Hebrews).

But what Trinitarian asserts that “God just is Jesus”? Of course that is ridiculous. God is the Father, Son and Spirit.

Consider an illustration from the Old Testament. In Genesis 5:1-2, we read,

When God created mankind, he made them in the likeness of God. He created them male and female and blessed them. And he named them Adam when they were created.

Regarding my defense of the deity of the Holy Spirit from Acts, Tuggy writes,

The personality and “deity” of God’s spirit is no part of the content of Peter’s message in Acts 2, which is what my post was about.

In summary, Tuggy’s rebuttal was high on rhetoric but lacking in substance. He, moreover, thoroughly misrepresents the position of Trinitarians such as myself. Tuggy’s assertions notwithstanding, the book of Acts — and in particular Peter’s sermon here in Acts 2 — is thoroughly Trinitarian.