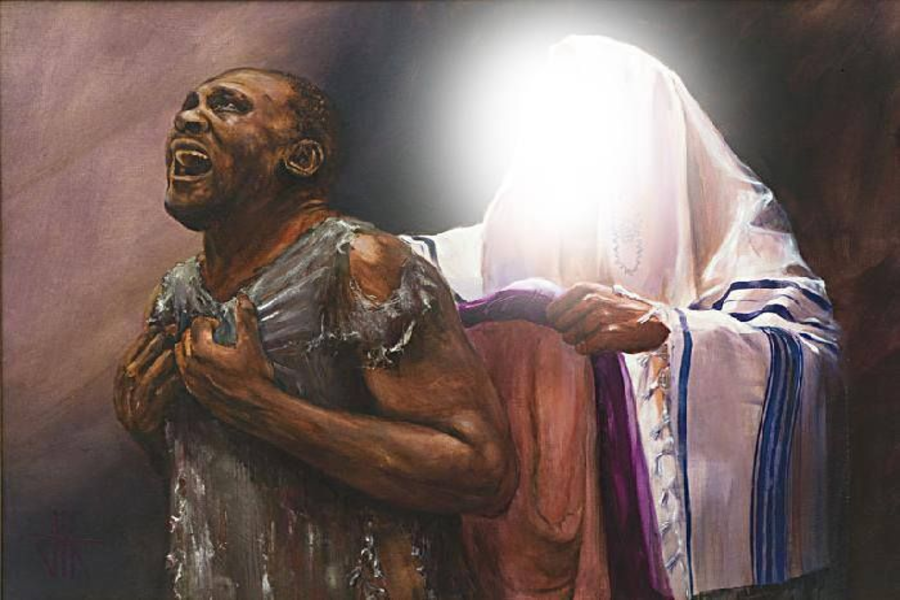 Previously on this site, I have highlighted the types and foreshadows of Christ which are found in the Old Testament Scriptures with respect to the Abraham affair and the Passover celebration. In this article, I want to consider yet another remarkable Old Testament foreshadowing of Christ, this time from the book of Zechariah. Let’s take a look at the sixth chapter in this prophetic book:

The first curious thing to notice of in this passage is the significance of the character names. The name “Joshua” is translated from the Hebrew “Yehoshua” — which is the same name that is translated “Iesous” in the Greek Septuagint. In our English New Testament Bibles, the name “Iesous” is translated “Jesus”. We would also do well to take note of the name of Joshua’s father — Jehozadek. The name literally means “Jehovah Righteousness” (readers may recall the translation of the name of Melchizedek as “King of Righteousness”). Isn’t it a curious set of coincidences that not only is the one who would be explicitly said to be prototypic of the coming Messiah given the name “Jesus”, but his father bears the name “Jehovah Righteousness”?

The second thing which bears mentioning is the high priestly office occupied by Joshua. Jesus is said to have been a high priest (e.g. Hebrews 7) because he has atoned for sins once and for all by the sacrifice of Himself. He made the ultimate sacrifice to end all sacrifices. And Christ also is a priest inasmuch as he is the one mediator between God and man (1 Timothy 2:5). But Joshua is not merely a high priest. He is also a king. To understand the significance of this, consider that the only other character in the Old Testament who held the offices of both priest and king is Melchizedek.

In Psalm 110, David writes of the coming Messiah that “You are a priest forever, in the order of Melchizedek.”As already mentioned, Melchizedek literally means “King of Righteousness”. Melchizedek is described in Genesis 14:18 as being “king of Salem” — which literally means, “King of Peace”. Hebrews 7 explains,

1 This Melchizedek was king of Salem and priest of God Most High. He met Abraham returning from the defeat of the kings and blessed him, 2 and Abraham gave him a tenth of everything. First, the name Melchizedek means “king of righteousness”; then also, “king of Salem” means “king of peace.” 3 Without father or mother, without genealogy, without beginning of days or end of life, resembling the Son of God, he remains a priest forever.

4 Just think how great he was: Even the patriarch Abraham gave him a tenth of the plunder! 5 Now the law requires the descendants of Levi who become priests to collect a tenth from the people—that is, from their fellow Israelites—even though they also are descended from Abraham. 6 This man, however, did not trace his descent from Levi, yet he collected a tenth from Abraham and blessed him who had the promises. 7 And without doubt the lesser is blessed by the greater. 8 In the one case, the tenth is collected by people who die; but in the other case, by him who is declared to be living. 9 One might even say that Levi, who collects the tenth, paid the tenth through Abraham, 10 because when Melchizedek met Abraham, Levi was still in the body of his ancestor.

Like Melchizedek, Jesus occupies both offices — he is a priest and a king. At no other time in the history of Israel did an individual occupy both offices. Indeed, the one king who is recorded to have desired the office of the priest — Uzziah — was struck with leprosy when he tried to burn incense (2 Chronicles 26). Fascinatingly, Isaiah begins his sixth chapter by writing, “In the year that King Uzziah died, I saw the Lord, high and exalted, seated on a throne; and the train of his robe filled the temple.” Several textual indicators suggest that it is Christ whom Isaiah beheld in this chapter, and we are told as much explicitly in John 12:39-41. Isaiah thus seems to draw a contrast between the man who wanted to be a high priestly king and the one who would ultimately be the true high priestly king.

5 “The days are coming,” declares the LORD,
“when I will raise up for David a righteous Branch,
a King who will reign wisely
and do what is just and right in the land.
6 In his days Judah will be saved
and Israel will live in safety.
This is the name by which he will be called:
The LORD Our Righteous Savior.

In the third chapter of the book of Zechariah, two characteristically Messianic designations are used: “my servant, the Branch.” The servant title likewise derives from the book of Isaiah. Indeed, the suffering servant of Isaiah 52:13-53:12 is referred to as “my servant”. This most famous passage begins with Isaiah 52:13, in which we read, “See, my servant will act wisely; he will be raised and lifted up and highly exalted.” And later on (53:11), we likewise read, “After he has suffered he will see the light of life and be satisfied; by his knowledge, my righteous servant will justify many, and he will bear their iniquities.”

The vision of chapter 3 of Zechariah is somewhat different from that of chapter 6 inasmuch as Joshua represents not the Messiah but the nation of Israel. In this vision, rather, it is the angel of the Lord who represents Christ. The study of “the angel of the Lord” thread which runs throughout the Old Testament is another very interesting study which lies beyond the scope of this article. But the bottom line is that numerous evidences indicate that “the angel of the Lord” is a Christophany — that is, a pre-incarnation appearance of Christ. Let’s briefly take a look at the vision detailed in Zechariah 3:

1 Then he showed me Joshua the high priest standing before the angel of the LORD, and Satan standing at his right side to accuse him. 2 The LORD said to Satan, “The LORD rebuke you, Satan! The LORD, who has chosen Jerusalem, rebuke you! Is not this man a burning stick snatched from the fire?”
3 Now Joshua was dressed in filthy clothes as he stood before the angel. 4 The angel said to those who were standing before him, “Take off his filthy clothes.”

Then he said to Joshua, “See, I have taken away your sin, and I will put fine garments on you.”5 Then I said, “Put a clean turban on his head.” So they put a clean turban on his head and clothed him, while the angel of the LORD stood by.6 The angel of the LORD gave this charge to Joshua: 7 “This is what the LORD Almighty says: ‘If you will walk in obedience to me and keep my requirements, then you will govern my house and have charge of my courts, and I will give you a place among these standing here.8 “‘Listen, High Priest Joshua, you and your associates seated before you, who are men symbolic of things to come: I am going to bring my servant, the Branch. 9 See, the stone I have set in front of Joshua! There are seven eyes on that one stone, and I will engrave an inscription on it,’ says the LORD Almighty, ‘and I will remove the sin of this land in a single day. 10 “‘In that day each of you will invite your neighbor to sit under your vine and fig tree,’ declares the LORD Almighty.”

The reference to Israel being snatched like a burning stick from the fire essentially alludes to the fact that God has snatched the nation of Israel from potential disappearance in their captivity — like pulling a stick out of the fire just before it is torched (see also Amos 4:11). The symbolism of the “filthy clothes” refers to the habitual condition of defilement of the priesthood and the people — which was ultimately the basis of Satan’s accusation that the nation of Israel is morally impure. These filthy clothes are removed from Joshua, and this represents the promised future “forensic justification” of Israel. The rich robes which clothe the high priest are symbolic of imputed righteousness (see Isaiah 61:10). The clean turban, which is placed on Joshua’s head, represents the restoration of the priesthood of Israel. This turban was part of the dress of the high priest, and would have inscribed on it the words “Holiness to the LORD” (Exodus 28:36-37; 39:30-31).

The final part of Zechariah 3 says,

8 “‘Listen, High Priest Joshua, you and your associates seated before you, who are men symbolic of things to come: I am going to bring my servant, the Branch. 9 See, the stone I have set in front of Joshua! There are seven eyes on that one stone, and I will engrave an inscription on it,’ says the LORD Almighty, ‘and I will remove the sin of this land in a single day.

0 “‘In that day each of you will invite your neighbor to sit under your vine and fig tree,’ declares the LORD Almighty.”

The stone that is set in front of Joshua is yet another reference to the Messiah. In Psalm 118:22-23, Isaiah 8:13-15; Isaiah 28:16; Daniel 2:35,45; Matthew 21:42; Ephesians 2:19-22 and 1 Peter 2:6-8, the Messiah is spoken of as being a stone, though in several senses — a stone which the builders have rejected; a stone which makes men stumble, a stone of refuge, a destroying stone and a stone of foundation. In the present context, He is the foundation stone. The seven eyes on the stone represent His omniscience. In Revelation 5:6, the apostle John speaks of the slain Lamb of God having “seven eyes”. There are several plausible interpretations of the engraving on the stone. It may be the case that this is a reference to the cornerstone of the temple building on which will be engraved an inscription attesting to its Divine Builder. As such, there is a close association with the removal of the “sin of this land in a single day” — no doubt a reference to Christ’s redemptive provision at Calvary.